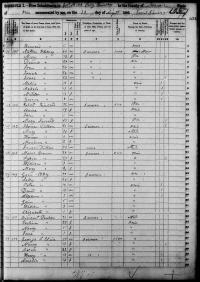 M, b. December 1857, d. 1920
Jessie Denbow 's middle initial appears to be either an 'H' or 'R.' However, Dave Denbow's dad says the middle name was William. He was born in December 1857 at Morley Township, Scott, Missouri, USA. He married Nancy Roggers in 1885; Marriage year arrived at by subtracting 'years married' from census year of 1900. The '15' year figure was an educated quess from blurred handwriting. Jessie Denbow died in 1920.

Memorial Marker in Hamilton Cemetery, Monroe County, Ohio. He is actually buried in an unmarked grave in Mound City National Cemetery near Cairo, Illinois. The year of death on this marker is wrong. He died in 1862 in a military hospital in Paducah, Ky.

John Denbow was born in 1797 at Harford, Maryland, USA. He married Martha A. Sharp, daughter of James Elias Sharp and Sarah Ware, on 9 March 1818 at Harford, Maryland, USA; This marriage date, which differs by exactly one year from the one recorded in the Marriage License book for Harford County appears to be correct. I suspect a clerical error in the book.1 John Denbow married Martha A. Sharp, daughter of James Elias Sharp and Sarah Ware, on 9 March 1819 at Harford, Maryland, USA.2 John Denbow and Martha A. Sharp resided at Monroe, Ohio, USA, in 1849; Sharp v. Ayres states that Martha and John Denbow live in Monroe County, Ohio.3 John Denbow was a farmer in 1850 at Lewisville, Monroe, Ohio, USA.4 He appeared as Head of Household in the census of 31 July 1850 at Lewisville, Monroe, Ohio, USA. Bazzel Denbow, son, and family are listed as neighbors on this census.4 The Denbows in the Civil War: John was the father of Bazzel, Levi, Martin, James, William and who fought in the 78th Ohio Volunteer Infantry. Another son, George, was in the 27th OVI. John enlisted -- at age 64 -- saying he was 44. According to several entries in his military record he died in Paducah, apparently of "chronic dysentery." Another entry says he died about a month later in Bolivar, Tenn. Family tradition had said he died in a Creek with his long hair embeded in the mud. The Bolivar story would be more consistent with the family story. However, the recent discovery of the diary of a hospital steward from Paducah, Kentucky, almost certainly confirms beyond a reasonable doubt his death in Paducah at the earlier date. He began military service on 3 December 1861 at 78th Ohio Volunteer Infantry, Lewisville, Monroe, Ohio, USA.5 He died on 14 April 1862 at Paducah, McCracken, Kentucky, USA; Actual diary entry that contains numerous errors (wrong age, transcription error on regiment number, etc.): "April 14, today I was awakened at four o'clock to lay out a dead man. His name was Bryan Davis, K. 28th Ill. wounded through the lungs. Since writing the above a man died. His name was John Denbow, 18 Ohio. He was upwards 77 years old. His son is also in the hospital; he is over 45 years old."5,6 He ended military service on 14 April 1862 at St. John's Church Hospital, Paducah, McCracken, Kentucky, USA; military service ended when he died in an U.S. Army hospital. This hospital may have been located in St. John's Catholic Church.5 He died on 26 July 1862 at Bolivar, Hardeman, Tennessee, USA; This date would fit the family story better, though it is before the Battle of Bolivar that the 78th OVI fought in. However, the diary from the Paducah hospital makes this highly unlikely.5 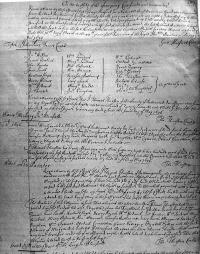 John Denboe was born in 1640 at England.1 He married Jane Woodfield in 1682 at St. Stephens Parish, Cecil, Maryland, USA, According to Sandy Denbow Jameyson: St. Stephen's Church was located in the Sassafras District. This was near the area of the Sassafras River, in Cecil County, Maryland. It is within this area that John and wife Jane owned or rented property. Their son Thomas settled up their estate after John's death. Other Children were John and Jane. Jane married in the Bell Family. This is probably the same John Denboe who came to Maryland as an indentured servant in 1664.2 John Denboe was also known as John Denbow.2 He died on 27 November 1704 at Cecil, Maryland, USA.2

M, b. 1849
John Denbow was born in 1849. He married Jane Miller in 1869. John Denbow Reference: Data from Gary A. Denbow. Said that his father statedthat John was a child in this family.

M, b. 1781, d. 30 July 1850
John Denbow Jr. was born in 1781.1 He married Elizabeth Streett, daughter of Thomas Streett III and Jemima McClure, on 18 January 1808 at Harford, Maryland, USA.2 John Denbow Jr. died on 30 July 1850 at Harford, Maryland, USA.1 Sandy obtaied information on John Jr., Betsy and Clemency from records of St. George and St. John's Parishes in Harford County, Maryland. She says her placement of them in this family is speculative.3