George Leroy Todd was born in 1893. He and Iva Denbow were married in 1913.
Family Explorer 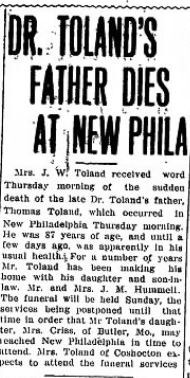 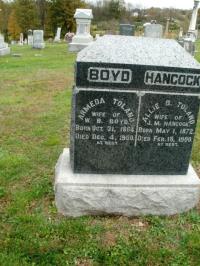 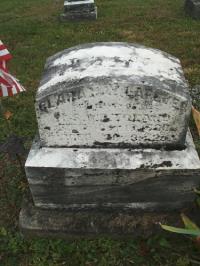 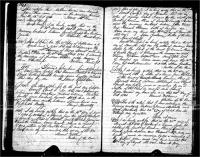 Obituary from local paper, as recorded in Thompson Genealogy, p. 2, of Denbow Secton: 'Nicholas St.Clair Toland, the youngest son of Benjamin F. and Martha Denbow Toland, was born in Carrol County, Ohio, December 8, 1832, and after a life of active and noble service of 84 years, 2 months and 14 days duration he was called by the One whom he loved to serve, to that broader and loftier field of service on the evening of February 22, 1917. The deceased was married to Miss Rosanna Simmons in 1858, who together with three daughters, Mrs. Clara Lafever, Mrs. Meda Boyd, and Mrs. Allie Hancock have preceded him to the great beyond. Two daughters, Mrs. Effie Mitchell of Kansas City, Mo., and Mrs. Famella Fry of Mansfield, Ohio, six granchildren and two great grand children survive him. 'In 1889 Dr. Toland married Miss Martha Mozelle Ewart,who has been a loving and devoted companion and who, assisted by the two daughters, has given such constant and tender care during his late illness and now with them mourns their loss. Dr. Toland began active practice as a physician in Bakersville, Coshocton Co., Ohio in the spring of 1858. In the 1864 he removed to Tuscarawas Co. where he recruited a company which became known as Co. E., One Hundred and Ninety Fourth Ohio Volunteer Infantry, in which he did creditable service as First Lieutenant until the close of the war, having been mustered out with that rank. (When he moved to Tuscarawas Co. he moved to Genadenhutten, and practiced medicine for a time.) The Dr. has kept alive his recollections of his experiences of war by membership with the Grand Army of the Republic, he having filled all the (official) chairs in Updyke Post No. 486 of Martinsburg, Ohio, which he has served as post surgeon since its organization. In 1867 he began his professional work in Martinsburg, Ohio, where he has practiced continuously and successfully for 50 years. He will be greatly missed in the homes of this community where he has so often brought relief, comfort, cheer and blessing as well as in the church where he has been an active and faithful member for so many years. He was a man of rare intellect and superior judgment, always interested in the betterment of the community and ready and willing to render his services to this end. In his death the community loses a good and valuable citizen and an obliging neighbor; the church a consecrated member; the wife a devoted husband; and the children a loving father. His work on earth is now ended and we say, At length released from many woes, How sweetly doth thou sleep, How calm and peaceful thy repose, While Christ thy soul doth keep. [There was a written note to this obituary which reads: "He was laid beside his first wife and three children in Martinsbury (Cemetery) on Monday at two o'clock. George Spring and Gary Spring attended the funeral."]

Thompson copied this obit from an original in the possession of: Miss Dora Spring (daughter of Gary Spring) 467 North Broadway, New Philadelphia, Ohio.6

John Travis witnessed the birth of Elizabeth Travis in 1837 in Butler, Ohio, USA.